Thoughts from a former Samaritan Volunteer

Last summer, I sat in a black silence with tears streaming down my face, a faint white glow omitting from my laptop. On my screen the show ’13 Reasons Why’ filled my Netflix browser. I had just binged watched the entire series in one sitting, staying up until the early hours of the morning until it was all over. Around the time of the show’s release, the internet was ablaze. Hot debates condemned and praised the show in equal measures.

I bashed my screen shut. I felt emotionally exhausted and incredibly frustrated that this type of programme existed in 2017.

As a former Samaritan volunteer, the show undermines a lot of the training that I was given in terms of how we talk and approach discussions on suicide.

For one, there were basic issues with semantics, with the show marketing the character Hannah Baker as having ‘committed suicide’. Such language is not appropriate as suicidal feelings are not criminal in the way that the word ‘committed’ implies, nor something shameful. How someone discusses suicide matters, we want people to feel comfortable and able to talk about their feelings without judgment.

The very structure of the show itself, too, is incredibly insensitive: centering around 13 ‘revenge-fantasy’ style tapes that detail a multitude of reasons for why Hannah ended her life. Such a structure is also not reflective of the real world. Rather, it glamourises and romanticises suicide.

The response to the series is also very revealing. The show’s tape structure has become a source of pop culture. It has spurred a series of memes, with Hannah Baker’s opening line ‘Welcome to your tape’, being used as a source of humour for everyday, minor problems. 13 Reasons Why, then, has led the internet towards trivialising suicide. 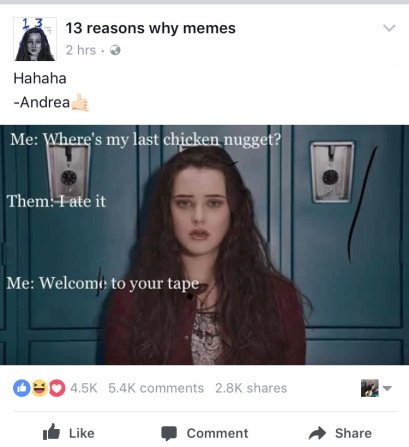 When someone ends their life, it is definite and final. Hannah Baker never leaves the series, she lurks, she narrates: her voice is there, providing answers and explanations in her tapes to all of the painful questions that her bereaved are desperate to know. This is not reality.

But perhaps the greatest failing of Season 1 is the show’s representation of the guidance counsellor. In the final episode, we see a distressed, despairing, suicidal teenager asking a professional for help. The counsellor is Hannah’s last grasp at hope and she is abjectly let down by the system that was meant to support her. Later on in the episode, Hannah ends her own life. As a show marketed as being educational, this pivotal moment in the series transcends being simply a dramatic, thoughtless narrative arc: it is damaging for vulnerable young people to see because it communicates a ruinous message to those who feel suicidal. It suggests that no help, in any capacity, is available for a young person who wants to end their life: which is truly not the case, someone cares and does want to listen.

The scene also subverts all of the outreach and campaigns that Mental Health organisations around the U.K, and the world, have spent tireless hours working on in order to promote people reaching out for help. Mental Health organisations will always advocate for finding support from people who care, whether this is from a relative, a friend, or a non-judgmental organisation like Samaritans, or Mind, because unlike 13 Reasons Why’s depiction, there is support out there for people who need it.

With the show’s recent release of Season 2, it is important that we are aware of the content depicted and are critical of the way in which it is represented.  I watched Season 1 because I wanted to understand it for myself. I pressed play, and part of me wishes that I hadn’t. But curiousity has that effect, doesn’t it? Don’t think of an elephant. Don’t think of an elephant. And the elephant is there: revolving around in our minds until you have to see what the fuss is about, no matter how upsetting it might be.

If you choose to watch 13 Reasons Why,  please make sure you are in the right emotional place to do so.

And importantly, remember that despite its marketing, this show is not educational; it is characterised by its sensationalism and shock factor.

Support lines for other countries can be found here

View all posts by thecharlotteweb